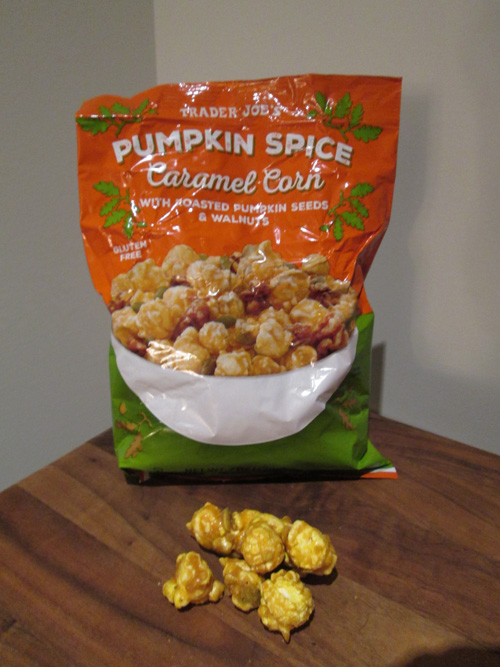 I'm generally not a huge fan of bagged popcorn, or popcorn in general for that matter, but I'll make an exception for caramel corn. I'd tried the Mango Coconut Caramel Corn TJ's had over the summer and was wildly unimpressed, but I decided to give it another shot when I saw this Pumpkin Spice Caramel Corn on the shelf. As soon as I started eating it, I was glad I did! While I don't think I've ever had bad caramel corn (aside from the Mango Coconut abomination from Mango Madness over the summer), this definitely stands out as some of the best. Pumpkin in general pairs pretty fantastically with caramel, so these are really just two flavors that were meant to be united in the form of popcorn. The caramel is definitely the dominant flavor here, but the pumpkin definitely adds to it, while the addition of roasted pumpkin seeds and walnuts gives the popcorn a nice crunchiness. My only caveat about this product is that it's a little pricey at $2.99 for a fairly small bag. Still, it's definitely worth it, and I'm planning to buy another bag when I go back to TJ's this weekend! 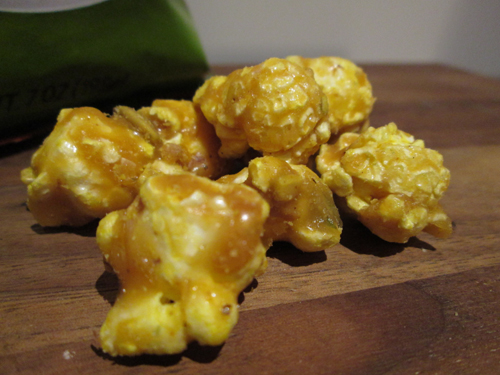 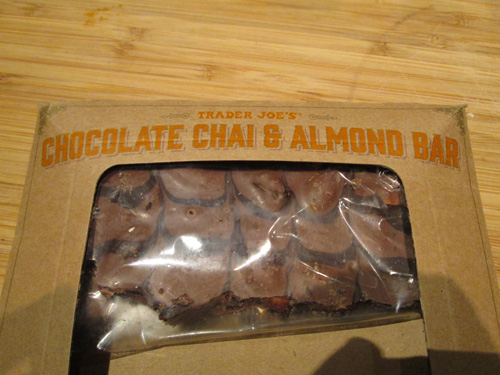 Like basically everyone, ever, I love chocolate! I also happen to really love Chai. Earlier in the summer I discovered Chai flavored chocolate bars at several other grocery stores and bought a few different varieties to try them out. I was mostly disappointed with them, except for one from Belgium that turned out to be pretty good, but at $5-8 for a tiny bar, I just couldn't keep buying them. So I was pretty excited when I discovered this at Trader Joe's. 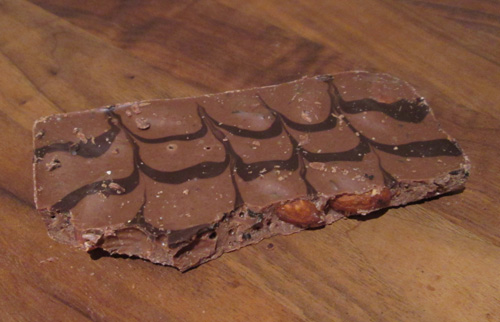 Unlike a regular chocolate bar, this one is clearly meant to be consumed over several sittings. It's not only larger in size, but also in thickness, and is actually more like a chocolate bark than a candy bar. The chocolate and chai balance each other out nicely, with a good blend of sweetness and a bit of spiciness. The almonds are good, but I think I'd have actually liked it a bit more without in this case. Although they do add to the quality of the texture, especially since the bar is so thick. I'll definitely buy this again, as evidenced by the fact that this first one is almost gone already! If you're not a big fan of chai, though, this probably won't be a great choice for you since the flavor is strong enough to be noticeable. 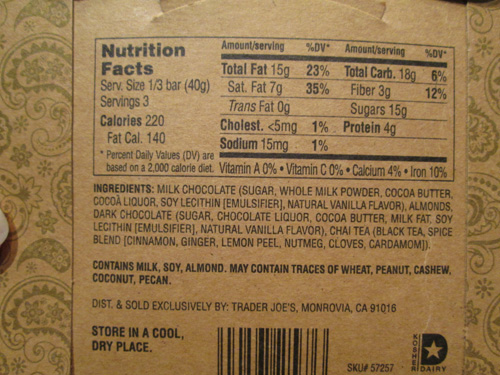 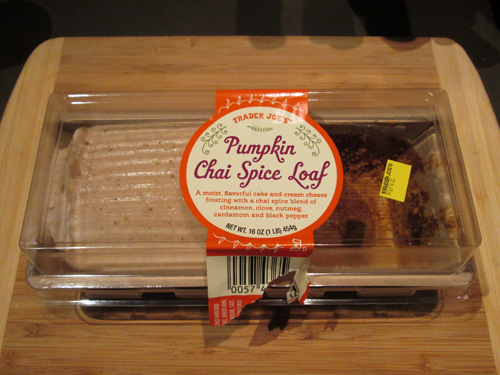 I saw this Pumpkin Chai Spice Loaf listed in the latest Frequent Flyer, and as a lover of all things Pumpkin and also all things Chai, I had to find it. I searched three different NYC stores before finally locating it at the new location that just opened a month or so ago on 3rd Ave & 32nd St. I got there just in time, too, because it was the very last one on the shelf! I opened it up as soon as I got home, while I was heating up lunch leftovers for dinner. 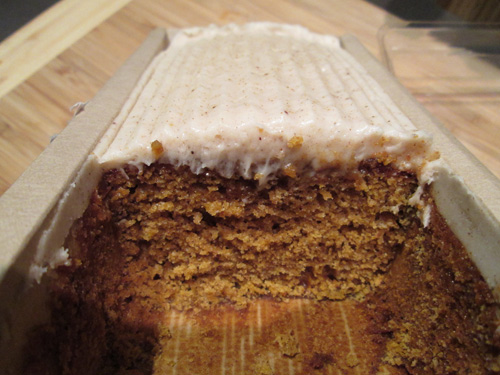 I'm a big fan of sweets in general, so a cake with two of my favorite flavors was going to be hard to screw up for me, and TJ's did a great job on this one. The cake itself is soft and moist, with a light pumpkin flavor that actually isn't all that sweet. The frosting is where the chai flavor comes in. It's got a nice warm flavor that also adds some sweetness to the cake. I generally like my sweets on the very-sweet side, but I really liked the subtle sweetness to this. I think pumpkin is one flavor where too much sweetness drowns out the pumpkin flavor, so this is a great balance. I'll definitely be picking up another one of these (if I can ever find them again).
Posted by Trader Joe's Is The Best at 11:12 PM No comments: