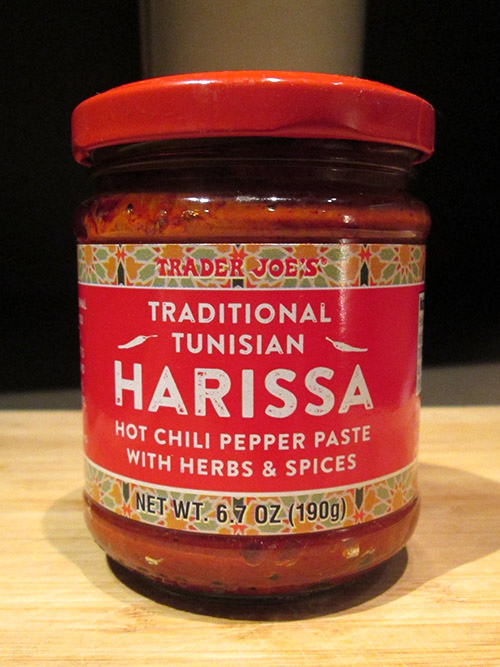 
When I first moved to New York, I quickly developed a love for gyros, eating at least 3–4 a week for the entire first year that I lived here. Most gyros here are served by street vendors with hot sauce and “white sauce” (a mystery sauce that’s sort of vinegary and definitely isn’t Tzatziki, but no one really knows what it is, so it’s just called “white sauce”) on top, in a more North African/Middle Eastern version of the gyro than the Greek version that most Americans are familiar with. When I’ve tried to replicate these on my own before, I’ve never been able to get a hot sauce that tastes as good as the sauce you get from street vendors, so I was psyched when I saw this harissa, knowing that it would probably be pretty close to what I was used to getting from street carts. Harissa, if you’re not familiar, is a paste made from chili peppers. While it’s not actually a sauce, it does have a similar flavor to a Middle Eastern hot sauce. 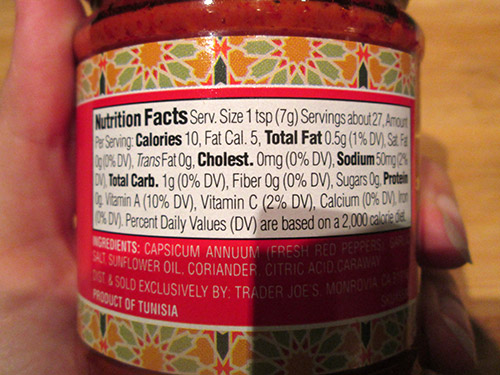 I whipped up some Trader Joe’s Gyro Slices to make myself a gyro from these, and slathered on a rather generous helping of the Traditional Tunisian Harissa. I thought I was going to breathe fire when I bit into it. Make no mistake, this Harissa is HOT. My eyes might start watering just thinking about it. I should have known to take it easy since it’s not actually a SAUCE, but a PASTE, and therefore is much more concentrated. I ended up whipping quite a bit off of the gyro, but once I got it down to a reasonable amount, I’m happy to say that I really loved this stuff! It is indeed an acceptable substitute for the hot sauce used at street carts. I’m sure there’s a way to actually turn this into a sauce by pureeing it with something else, but I don’t think I’m going to be quite that dedicated to figuring it out.

This goes great with gyros, but could also go great mixed with cream cheese or goat cheese and used as a dip, on sandwiches (maybe mixed with mayo to temper its spiciness), mixed with chickpeas, or with eggs. And since the stuff is so strong, you can probably make one jar last a long time. I’ve used it several times already and when I open the jar it doesn’t even look like any of it’s been used since I’ve used so little each time.
Posted by Trader Joe's Is The Best at 11:59 AM No comments: 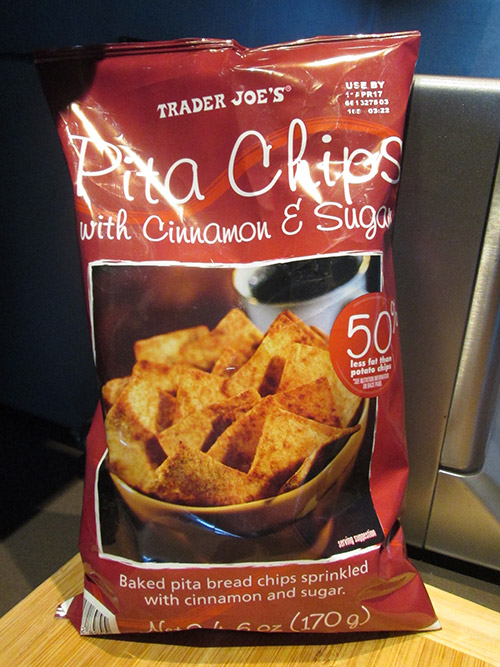 I got these to eat with the Apple Cinnamon Goat’s Milk Cheese Log, and they paired pretty well. On their own though, I’m not as big of a fan. They look like there's a lot of cinnamon and sugar on the chips, but I thought the flavor was a little weak. The flavor was definitely more pita, and less cinnamon and sugar. The texture was pretty good though. I remember reading someone say once that these chips reminded them of leftover bits of pie crust sprinkled with cinnamon, which does sound pretty accurate. But since crust is always my least favorite part of every pie, that probably explains why I was a little underwhelmed by these. Also, if you’re looking for a sweet snack that’s still relatively healthy, this is probably a good choice. 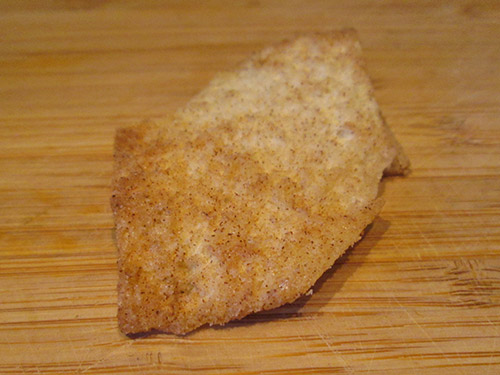 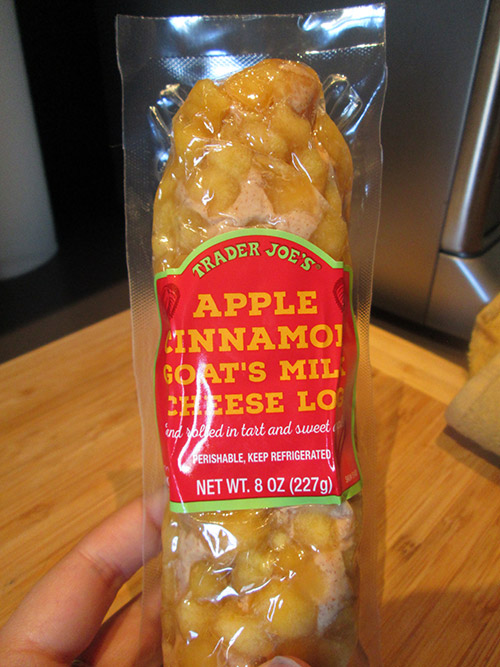 I’m a big fan of goat cheese, especially with dessert type flavors, so I was excited to see this Apple Cinnamon log at TJ’s. It has a good flavor, with the cinnamon mixed throughout the cheese instead of just on the apples. 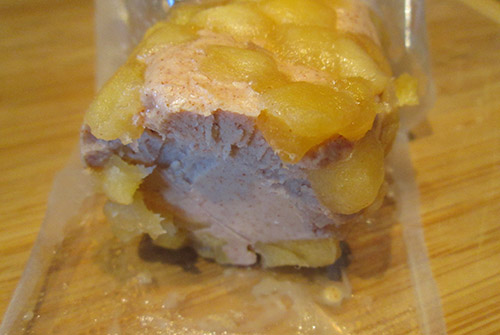 The cheese is a little on the sour/acidic side, which seems to be especially noticeable next to the sweetness of the apples, but the apples give it a nice sweet flavor. It goes great with cinnamon pita chips. Overall, I liked this, but I’m not sure I would get it again since I definitely like the blueberry version of this way more. 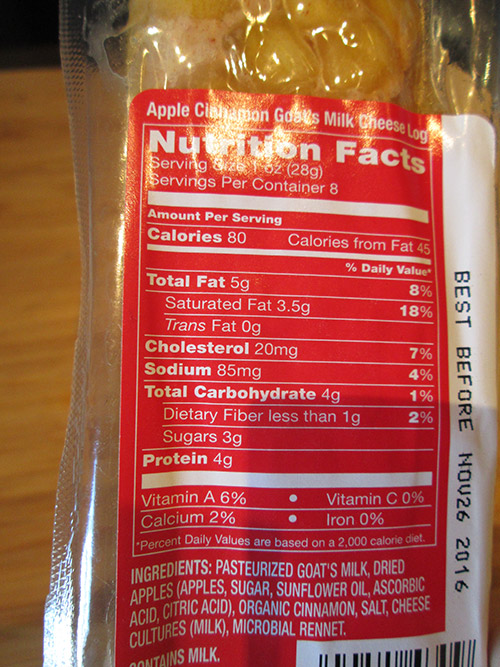 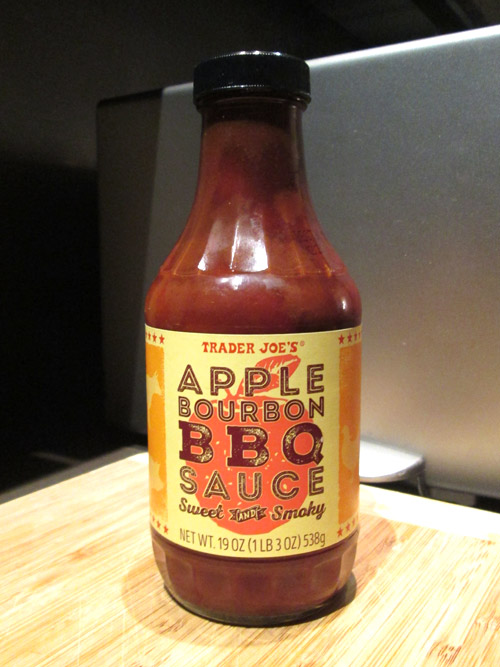 I'm a huge fan of apple flavored things, as well as barbecue, so when I saw this sauce, I was super excited. Unfortunately, after trying it, I was a lot less excited. The good news: this sauce is AWESOME if you want to eat it with pork. The bad news: this sauce is only okay if you want to eat it with chicken. I originally tried it on chicken and was disappointed by it. There was something about it that was too sweet, without much smokiness, tanginess, or spiciness that I could get into. I actually considered throwing it away, but I kept the bottle around, and a few weeks later when I had some pork I ended up deciding to try it again. I actually really liked it on the pork. It didn't seen as sweet, and the pork seemed to bring out some of the smokey flavor from the bourbon. I think if I'd have tried it on pork to start out, I'd have liked the sauce a lot more overall, but I didn't. That being said, while I'd buy it again if I was making a lot of pork, my odds of realistically buying it any time soon are low considering there are more versatile sauces I could opt for instead. 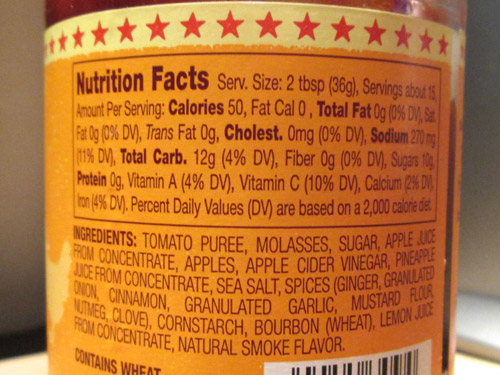 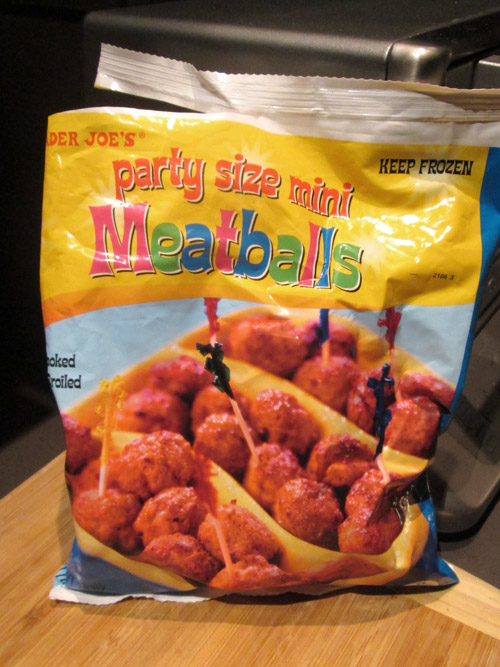 These meatballs are a mix of beef and pork and are great for party appetizers, or just a quick meal. I've bought them several times, and I usually use them for BBQ meatballs of some kind, along with one of TJ's barbecue sauces. I've never tried them in pasta, but I assume they'd be good there too. My only beef with these meatballs (see what I did there?) is that you can easily overcook them in the over or toaster oven if you cook them too long, or don't turn them over in the middle of cooking. But if you're looking for something quick to whip up, making some of these and then tossing them in some barbecue sauce is a great way to make a fast meal. 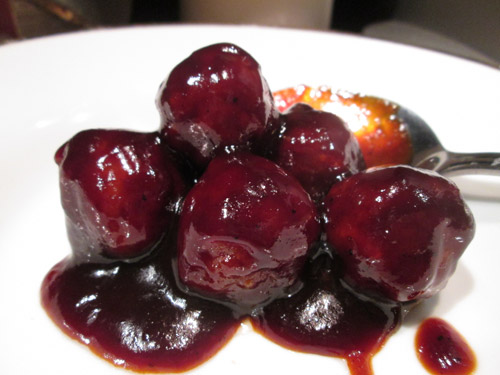 Posted by Trader Joe's Is The Best at 9:59 AM No comments: