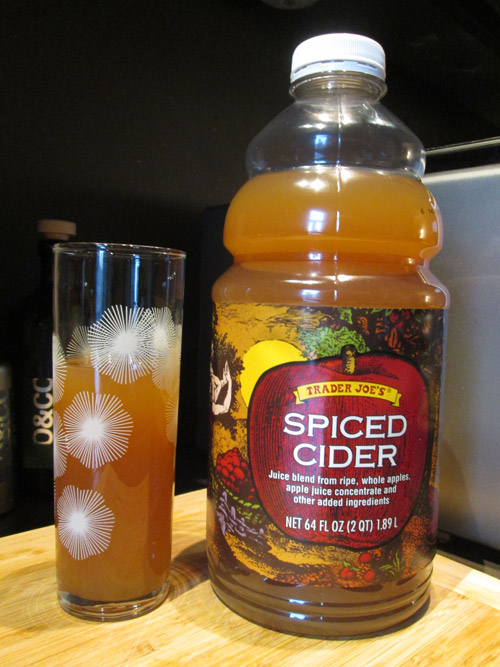 This is one of those drinks that I look forward to every year! If you like apples and cinnamon, I’m not sure how you wouldn’t love this drink. It was a smooth and sweet apple-y flavor, with a nice amount of cinnamon and other spices mixed in to give it a warm fall and winter flavor. I usually drink it cold out of the bottle (since you have to refrigerate it after opening) because I’m not patient enough to heat it up, but this is also really great as a warm drink. I’ve also added a bit of caramel to it a few times when drinking it warm to get a caramel apple flavor. I don’t know what else can really be said about this. It’s cider. It’s delicious. Buy 5 of them just for good measure.
Posted by Trader Joe's Is The Best at 1:00 PM No comments: 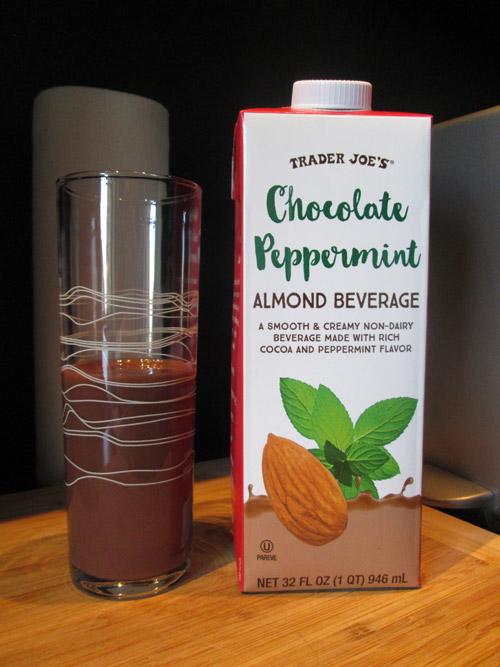 This is another new item at TJ’s that had a pumpkin predecessor that I found highly disappointing, but which really delivered when it came to the chocolate mint version. If you’ve ever had chocolate almond milk, this is basically the same thing, but with mint added. The consistency is good, not too thick or thin, with a super yummy mint flavor that could classify this as a dessert drink. The only downside is that I’m not sure there’s anything that this would really pair with outside of dessert. Unlike regular chocolate milk, I feel like this might be a little odd with cereal or anything else. Despite it’s lack of versatility though, it’s pretty great!
Posted by Trader Joe's Is The Best at 1:00 PM No comments: 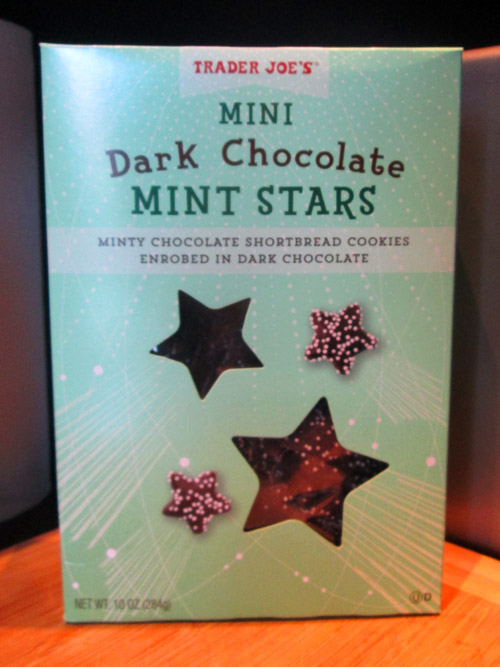 
I was a little skeptical when I saw these, since they looked similar to the Petite Pumpkin Spice cookies, but I figured chocolate mint was a harder flavor combo to screw up, so I picked up a box. 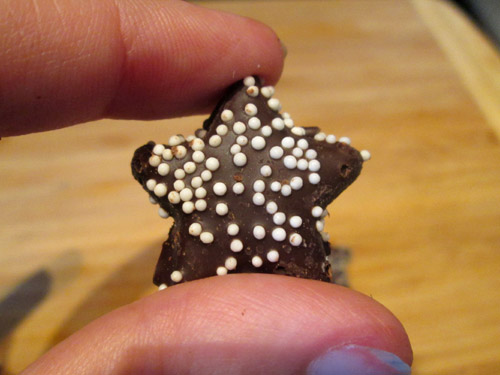 My hunch that these would be better was right, because these are amazing!! They’ve got a great dark chocolate flavor, and a strong mint presence all the way through. The small size let's the chocolate mint shine and the cookie has a nice texture. They’re similar to an Andes Bar cookie or a Girl Scout Thin Mint. I’m currently on my third box! 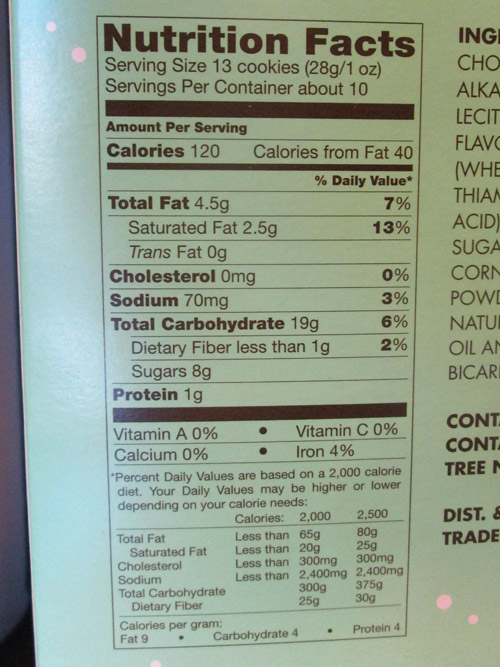 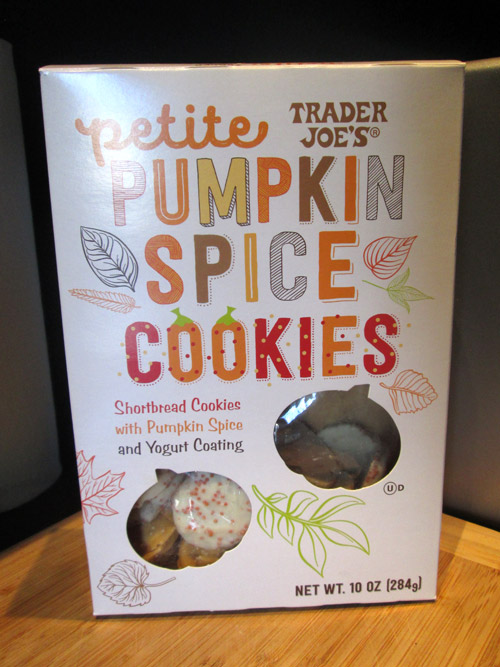 As a lover of all things pumpkin, I was excited when I saw these cookies, but ended up being pretty disappointed by them. There are two kinds of cookies in this package, with slightly different flavors: white cookies, and orange ones. I found the white ones to be lacking in flavor, but they did have a hint of spice in them. They were boring overall though. The orange ones seemed to have a stronger flavor, but they still weren’t that impressive. If you’re looking for a cookie with the slightest hint of pumpkin, you might like these, but I wasn’t impressed. 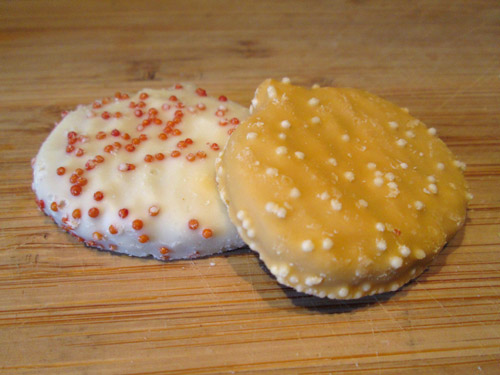 Posted by Trader Joe's Is The Best at 3:25 PM No comments: 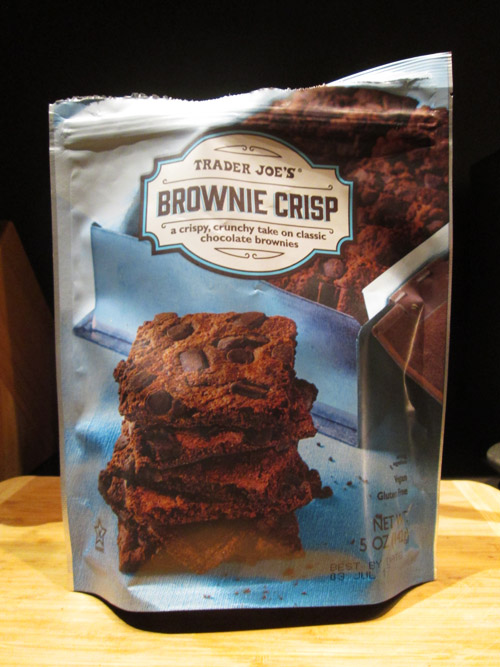 I’ve seen these brownie crisps all over the place for the past few years, and I kept wanting to try them, so I finally picked up a bag when I saw these at TJ’s. I’ve been known to bake a pan of brownies and then eat them all within 48 hours or less, and I’ve done the same with pans of cookies, so these brownie/cookie hybrid seemed like it would be a slam dunk. Unfortunately, I didn’t like them as much as I thought I would. The flavor was good, but they seemed to be lacking the chocolate chips that I thought would be more plentiful throughout. True to their name, they were indeed crisp. But I think part of what I love about brownies is their gooeyness and softness, and these kind of tasted like you baked brownies way too long. Still, I finished the whole bag in two evenings, so I wouldn’t say they were bad by any means. I would say that I would much prefer regular brownies over these though. The only way I could see myself getting these again over brownies would be if I’m looking for a low calorie snack (the whole bag is only 500 calories–if you’re wondering who would eat a whole bag at once, that person would be me). 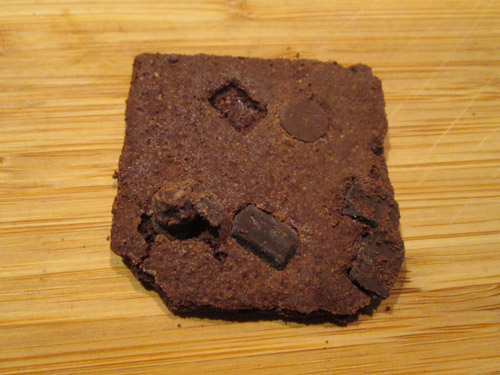 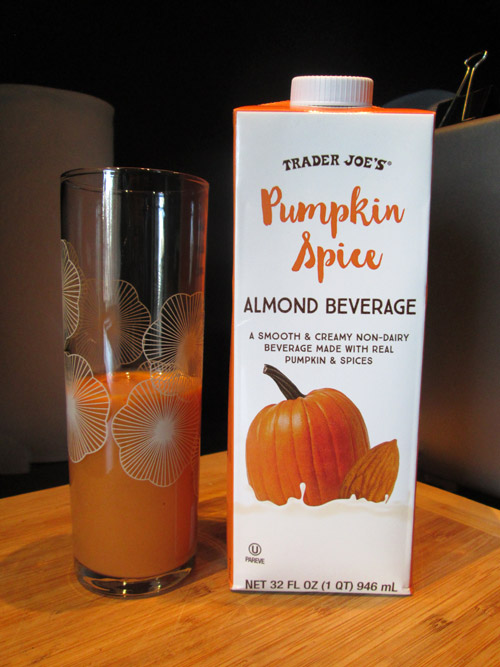 After being impressed with TJ’s Pumpkin Spice tea, I tried making a latte out of it by adding almond milk, only to be disappointed with the results. So when I saw this Pumpkin Spice Almond Beverage, I was excited. So excited in fact that I bought 2 containers of it. Which was a mistake. I noticed when I first poured it into my glass that it seemed extremely thick, and when I started drinking, the thickness of the drink was confirmed. It was a lot like drinking a melted milkshake, but not as cold (even though it had spend a few hours in the fridge). In addition to being so thick that I felt the need to chew it before swallowing, it also had a chalky consistency to it. I’m assuming they tried using real pumpkin to flavor this, which would explain the thickness and chalkiness. I didn’t really notice much of the almond flavor, which was fine, but the pumpkin flavor actually wasn’t great either. 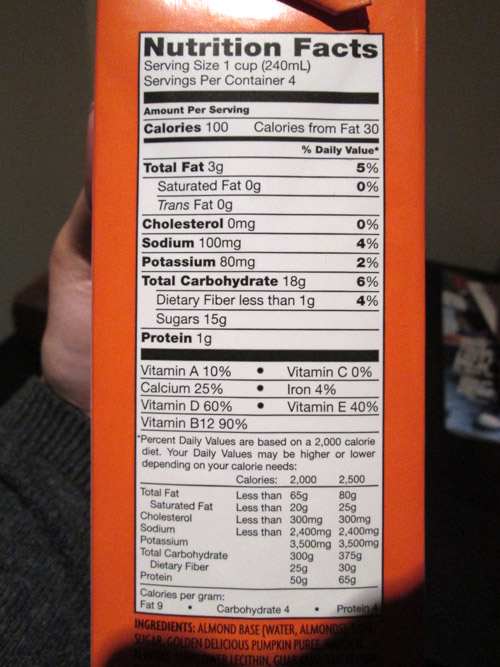 I drank the most of the first container trying to wrap my head around this bizarre thing I was drinking/chewing, and then decided that maybe I’d just gotten a bad container. So I threw it out and tried the other one, which was...lumpy? It was ever so slightly lumpy. It didn’t smell bad, so I don’t think it was rotten. I think it was just so thick that it lost its smoothness and became clumpy. Whatever the reason, it was truly repulsive and I poured the entire thing down the drain after a single sip (which I also spit out into the sink).
Posted by Trader Joe's Is The Best at 11:08 AM No comments: 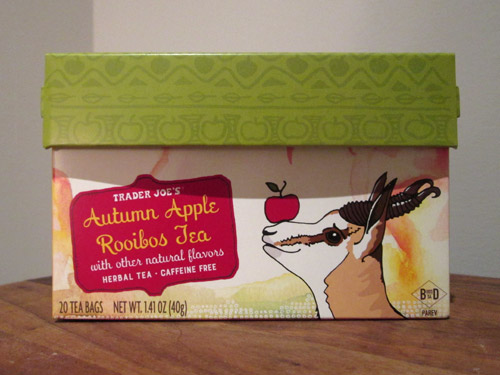 I've never been a huge fan of tea in general, but I've started getting into it over the past year or so. Since then I've tried several Trader Joe's teas, and the results have been hit or miss. Some of them I loved, but just as many I hated. This one goes in the hate category. I was really expecting to love this, given that I generally like anything that's apple flavored, but it was awful (at least in my opinion). I made this using the same triple brew method that I've used before so it's ultra-concentrated to get more flavor, but it still just tasted like nothing. Unfortunately I only discovered my intense hatred for this tea after brewing about 2 liters of it, so I tried my best to salvage it. I usually add a little bit of sugar to tea, but this actually made it even worse. One time I tried adding apple juice, which made it slightly better, but still not great. What did make it taste pretty good though, was adding some Unfiltered Trader Joe's Honey Crisp Apple Cider to it. That being said, I'd rather just drink the cider by itself. But I guess if you're wanting to cut back on the amount of sugar and calories in cider, but still get some good apple-y flavor, then doing the Apple Tea and Apple Cider combo might be a good fit for you. It's not a great fit for me, though, and the remaining 12 or so tea bags will be going in the trash. Why bother wasting my time with this when I could be drinking Pumpkin Spice tea instead?
Posted by Trader Joe's Is The Best at 10:31 PM No comments: 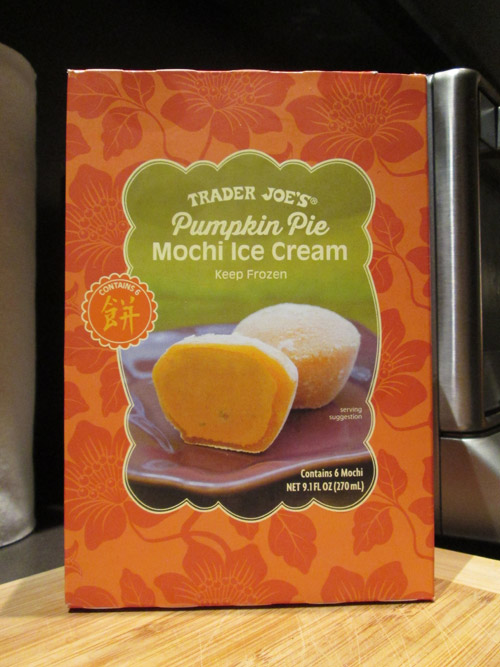 Pumpkin season at TJ’s is always one of my favorite times of the year. I usually make at least 3 trips to pick up roughly one of everything pumpkin related during the fall, and I made sure to grab a box of these when I saw them in the freezer section. I’ve had Trader Joe’s Pumpkin Ice Cream before, so I figured these had to be fairly similar. I didn’t try them side-by-side, so I can’t say for sure, but I’m pretty sure the ice cream in these is the same as the regular TJ’s pumpkin ice cream. Unlike some of the other recent mochi ice creams they’ve had (Mango Mango Mochi and Coffee Mochi), these weren’t dairy free, and also didn’t have a special center. However, they were still great! Not quite as good as the Mango Mango Mochi from the summer, but still pretty good. The ice cream was super pumpkin-y with some hints of cinnamon and nutmeg thrown in. There were also some small chunks of graham cracker in it for the crust part of the “pie” flavor, but I thought these were a little strange just because of the texture. I’d have been just as happy without them. Still, they were pretty great for a frozen fall/winter flavor (I usually like warmer desserts over ice cream when it’s cold out). I’m not sure I’ll buy them again though, just because there are so many other yummy holiday desserts to eat over the season. Maybe next year, though. 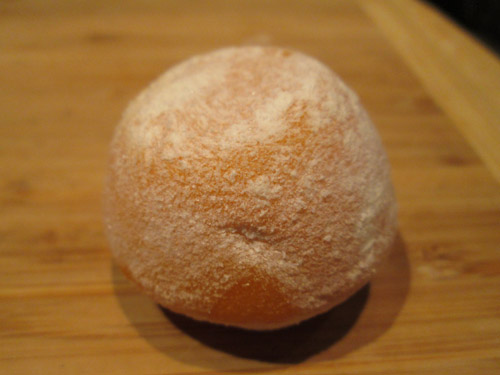 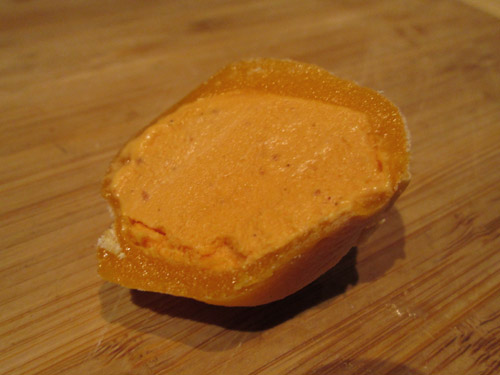 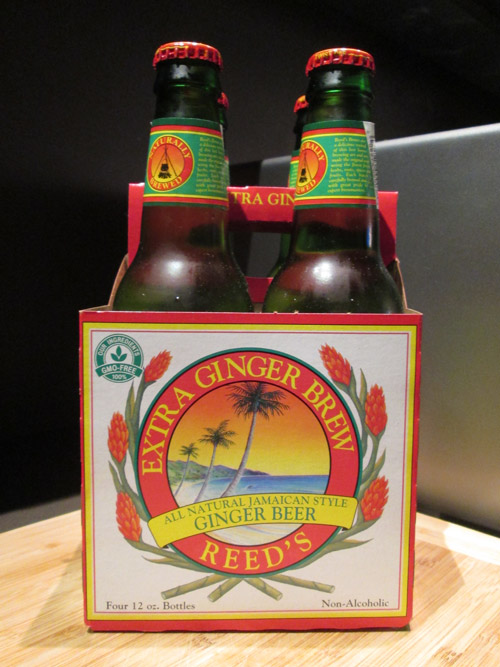 After mentioning Reed's Ginger Beer in my previous review for Trader Joe's Triple Ginger Brew, I figured I should probably going ahead and make a review for it. As a big fan of ginger beers, this is probably one of the best you can find at an affordable price. It has a super strong ginger flavor that can be a little overwhelming at first if you're not a big fan of strong flavors. You can actually see the ginger floating in the bottom of the bottle! If you're looking for a ginger beer or ginger ale for mixed drinks, this would be a good option that will provide some extra ginger flavor. I usually drink it straight, but if it's too strong, you could always mix it with club soda or seltzer. It's also a great option for non-alcohol drinkers at parties who want something more than water or boring soda. I buy this pretty frequently, and every time I do it's gone in about 4–5 days maximum. 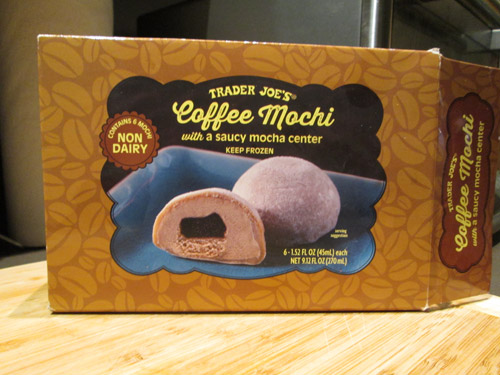 After eating several boxes of Mango Mango Mochi over the summer, I was super psyched with I saw these Coffee Mochi in the Frequent Flyer. I went to the store about three times before I finally found them in stock. 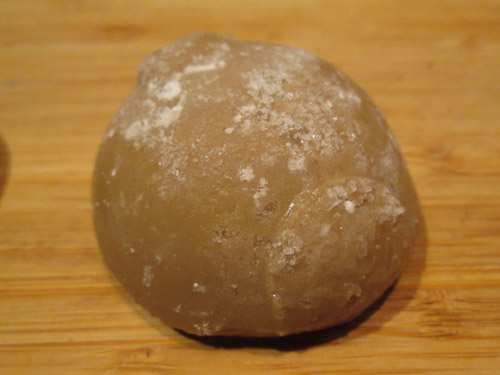 After waiting patiently for them to thaw a bit so the mochi wasn’t too hard I bit into one of these things with excitement, only to be super let down. I’d been expected a coffee ice cream type flavor, with a mix of coffee, milk, and sugar. Instead, it’s mostly just a strong coffee flavor. This might be great if you’re the type who likes your coffee pretty plain, but if you’re like me and you like your coffee loaded up with milk and sugar (like I do), you’ll probably find these to be very bitter. I also didn’t really like the mocha center that much. For me, it just added to the bitterness of it. Out of all the mochis I’ve tried at TJ’s I’d say this was the least impressive by a lot. 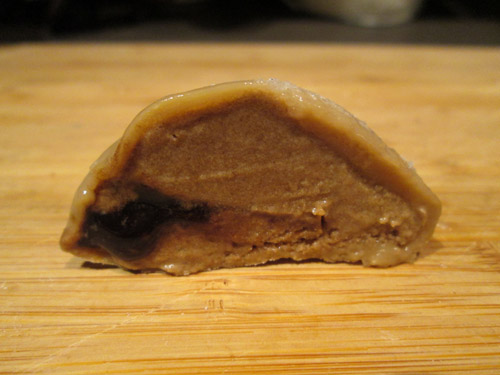 Posted by Trader Joe's Is The Best at 9:47 PM No comments: